The first Moorsbus of the year...

A great day out on the Moors courtesy of Mick and his East Yorkshire Motor Services Moors Explorer. Many thanks! Great pity that the S&D 128 couldn't wait 5 minutes more to make that connection at Pickering, though, even though Mick had got in touch to say that he was running late. Must have spoiled a lot of people's days.

Anyway, once again, I'm most grateful to all involved with the ME1 to have given me a wonderful Blakey to Danby walk (fog bound though it was!), a ride on the lovely Esk Valley railway, fish and chips and a great pint of Strongarm in Whitby and a smoky ride home behind a spectacular old American steam loco on the North Yorkshire Moors Railway.

A walk to Appleton-le-Moors Medieval Weekend

Appleton le Moors, an interesting village on the Tabular Hills near Kirbymoorside, held a long planned Mediaeval Weekend in July and our intrepid walker, Stuart Bell, offered - once we got his arm far enough up his back - to lead a guided walk there. It looks to have been a superb event and we all hope that it will be repeated next year. Here are a few of his photos.

We walked up from Sinnington - a lovely slow climb initially alongside the River Seven, but then up through the woods and fields to Appleton-le-Moors where their medieval weekend was in full swing. We enjoyed demonstrations by a blacksmith, a wool spinner and then a fascinating guided walk round historic village before I adjourned to the pub! 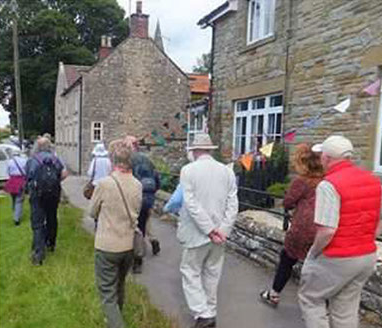 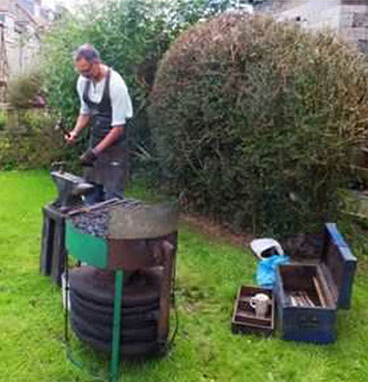 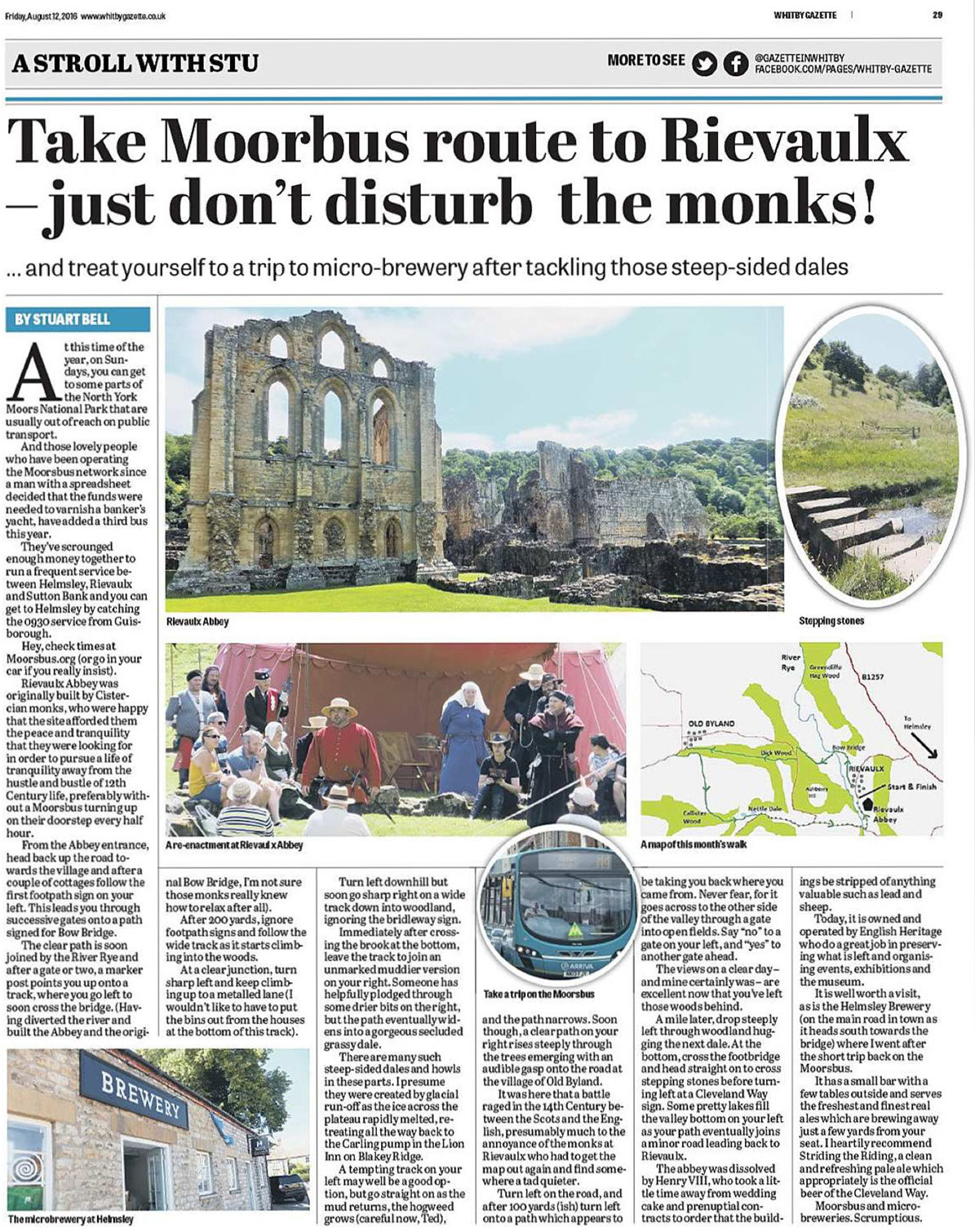 Tale from the Trail - Moorsbus "Back on the road and picking up speed!"

Here is Dave Greenwood's latest Tale, where he look at the origins of Moorsbus and charts it's revival. "I’m beginning this ‘Tale from the Trail’ with a riddle;

‘Question: How do you wake up a sleeping giant? Answer: Poke him with a stick. Question: But how big a

stick will you need?’

There will be readers who already know and have great affection for ‘Moorsbus’, but there will be many hearing the name for the first time. ‘Moorsbus’ is the rural bus service which has served walkers, visitors and residents in and around the North York Moors National Park for over 30 years. The first of its kind, it became a real asset to the National Park, it was widely acknowledged as ‘the best recreational service of its type in Europe’ and used as the model of good practice in many countries.

At the height of its powers there were up to fourteen ‘Moorsbuses’ whizzing around, providing scheduled services that connected larger towns surrounding the national park with small communities, popular destinations and attractions within the park area.

Then in 2013 ‘Moorsbus’ received an almost fatal blow. Vital funding was withdrawn as a result of some hard decisions necessary during the financial crisis. Sadly for many at the time, it's wheels literally stopped turning.

Fortunately there were people who just wouldn’t let ‘Moorsbus’ go. These volunteers banded together and formed the Moorsbus Community Interest Company with the aim of operating whatever services could be funded by contributions from passengers, supporters, parish councils, the North York Moors National Park and charitable donations. An opportunity for the public to give their support was also found with the creation of the Friends of Moorsbus.

They have been very successful. With careful management, they put ‘Moorsbus’ back on the road. The 2013 season saw one bus running services during the summer months, and this year there are three buses operating.

I met up recently for a brew and a chat with Bill Breakell, one of the volunteers who are actively involved in ‘Moorsbus’ today. Apart from making excellent coffee and sharing a passion with me for chocolate biscuits, Bill is eminently qualified to be one of the directors of the Moorsbus Community Interest Company. He has a lifetime of experience working in tourism and transportation. Bill has known ‘Moorsbus’ also from the start. He was an Assistant Director at the Moors Centre in 1975 and after wide experience in economic regeneration schemes based on heritage and tourism, he returned to the North York Moors National Park in 1990 as its Tourism and Transport Officer.

Bill told me how ‘Moorsbus’ started in the late 1970’s, when the National Bus company at the time was concerned that its main services would not be well used if remoter rural communities in North Yorkshire could not access them. From the start ‘Moorsbus’ was well received and very popular, the National Park’s support and involvement in the service increased over the years.

Local residents welcomed the improved transport links. They also saw it as a way to reduce the numbers of visitor cars using a fragile road network. Walkers enjoyed the opportunity for walks with easy transport links.

Visitors, young and old got good access to many areas of the National Park. The Park Authority supported the long term environmental benefits from a reduction in car journeys; improved air quality, reduction of the visual intrusion by traffic in the landscape and a contribution towards reducing their carbon footprint.

‘Moorsbus’ was and still is today, a win win win.

It uses comfortable modern vehicles, has affordable fares and reliable services. A Helmsley to Rievaulx and Sutton Bank route was added this year, which has been enormously popular with walkers using the Cleveland Way. Customer surveys show that when funding and income allows they want extra ‘Moorsbus’ routes adding. Rosedale and Dalby Forest are top of the list. Imagine the increased walking routes that would bring within reach!

So the answer to the riddle:

‘Moorsbus’ is the sleeping giant and it needs a poke with your stick. The more sticks/support there are for the service, the more ‘Moorsbus’ will be seen as a ‘well spent funding opportunity’, and more journeys and destinations can be added to the timetable.

So if you are a walker use the service when you can. Take a look at the timetable and think of all the opportunities for great days out.

If you are a visitor to the North York Moors look at all the places you can get to on a ‘Moorsbus’; no road map or traffic to worry about.

If you are resident in the park take a ‘Moorsbus’ when you can. Let the driver worry about the summer traffic and where to park at your destination.

Whatever size of stick you have – please use it."

Find details of Moorsbus timetables on www.moorsbus.org More news from the Trail »Paragraph

A walk from Sutton Bank to Rievaulx

Deciding that Moorsbus can’t be all work and no play, we sneaked off and took the M14 to Sutton Bank to stroll the five miles or so down to Rievaulx Abbey. It’s a delightful walk and very easy to follow since it’s the first section of the Cleveland Way. Leaving the Visitor Centre (Yes, bus users, it’s back to being your “Visitor Centre” as well. At least it is for a few days of the year) we head over the footbridge above the Cleave Dyke (Ah, that’s why they built it then). Braving the tiny tot’s mountain bike course in a very pretty more- Santa’s-Grotto-than-a-Christmas-one we came out at the Hambleton House racing stables. A lot of horsey history here; we were only a short head away from what was one of the foremost English Racecourses until the 18th century.

A grand, typical Tabular Hills big – sky stroll across to Cold Kirby, a picture postcard linear village. Look out for the roadside stall selling fabulous flapjack at Cold Kirby. Can you resist?

No, we couldn’t either. 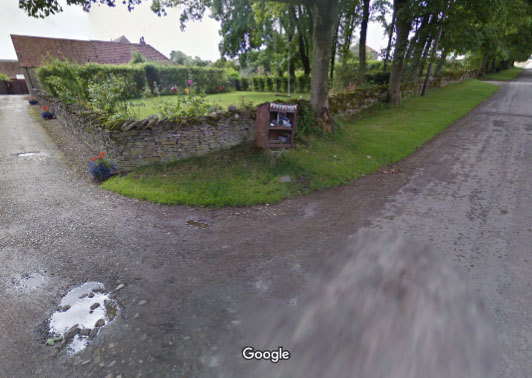 The Stall of Temptation at Cold Kirby

A slightly muddy dive into and climb out of a supposedly dry valley took us to a stony track with more big sky views, before we dropped down through the woods into the secluded Flassen Dale. At least, it seemed secluded until we found this rather nice use of green timber.

We’re still trying to guess what it is... 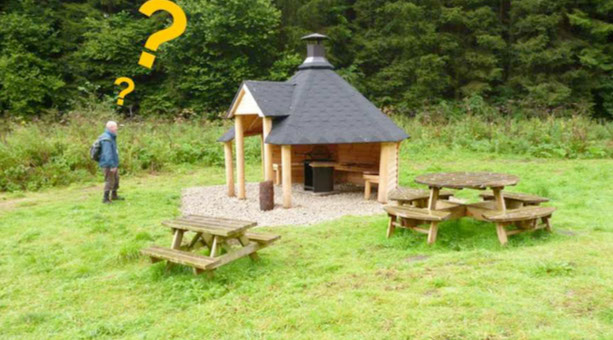 The amazing summer house (?) with barbecue in Flassen Dale.

Next came an even dimmer than usual pheasant that didn’t seem to realise that it was supposed to run away. Mind, it might have been a clever tactic to avoid being shot at by becoming too boring a target to bother with... 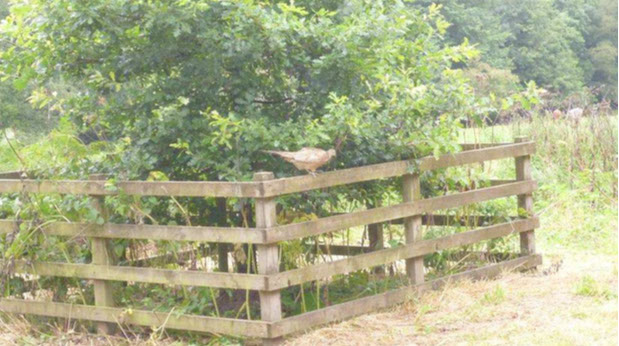 One of the dimmer occupants of Nettle Dale

It was very easy walking from now on. The surprisingly wide and flat Nettle Dale shares the same hard road as Flassendale. The posh looking cattle were far too busy gorging on the luxurious grass to even acknowledge our presence. 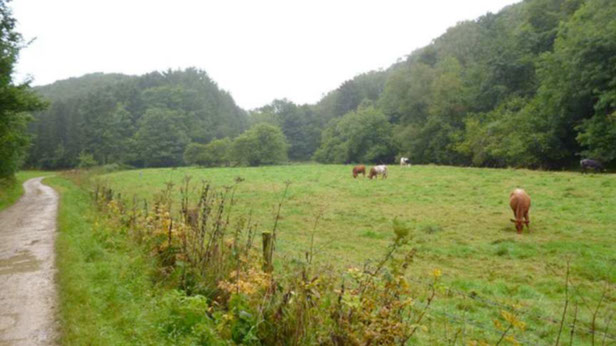 Nettle Dale and some more of its locals

We very soon came within sight of the very impressive fish rearing ponds that were built 900 years ago by the Cistercian monks of Rievaulx. They’re still in use by anglers, who presumably don’t eat their victims but rely on Tesco to keep the woolf from the door. A short slightly boggy bit led us to a few stepping stones and thence to another hard road. 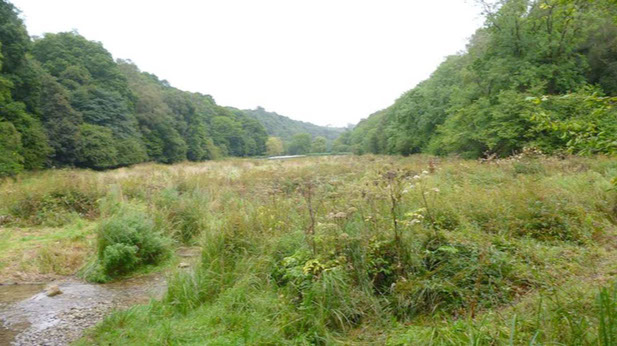 Nettle Dale and the first of the Rievaulx fish ponds

Arriving at the first lake it became obvious that this was the place to hang out for North Yorkshire’s mallards society. 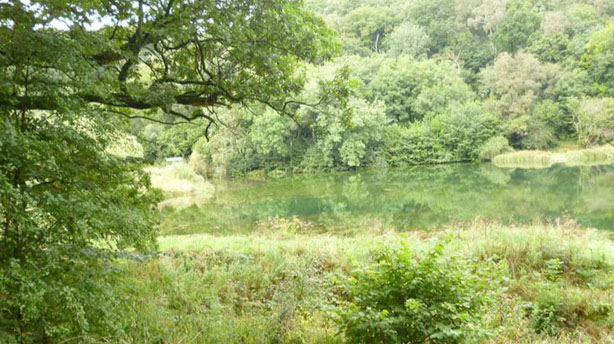 There were hundreds of them.

Until Helen tried to take a photo.

You’ll just have to take our word for it.

As we approached Rievaulx bridge Eden’s moaning about his new boots (actually 2+ years old) increased to a point where the entire walking group decided that it would be a lot easier on both the feet and the ear if we didn’t carry on to Helmsley but caught the M12 back from the Abbey. We just had time to admire the very impressive gardens at the cottage here before it was time to get ourselves to the Abbey bus stop. Somebody has spent, we would imagine, a huge chunk of their lives wielding a spade and pickaxe to create such a thing of beauty. It would be churlish to invade the private beauty of such a stunning place by pointing a camera at it, as thousands have no doubt done before, so we have no photos to show you. 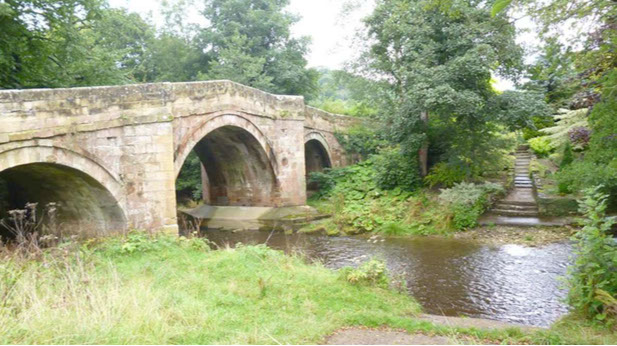 Apart from this one.

A short trot up the road and we arrived at the bus stop at the same time as Mike and the M12 Moorsbus. We needn’t have rushed though, because there were already 15 or so souls waiting there expectantly. They’d nearly all walked from Helmsley and were so amazed to see a bus stop when they came out of the Abbey that they wanted to see if this really was the quick, easy way home that they hoped it might be. We don’t think that they were disappointed.

And so to Helmsley and home.

The walk took about 2 hours at a gentle pace. It’s slightly rocky underfoot in places and a bit slippery in others, but mostly downhill and well signposted. It is a classic Sunday afternoon Moorsbus walk.